ICEQUAKES AND CONCLUSIONS FROM ANTARCTICA

In my last post I said I would share some of our scientific findings with you from my Baillet Latour funded research project, and now is the time! My co-authors (Denis Lombardi, Alejandro Diaz-Moreno, Rupert Bainbridge) and I have just published a paper entitled “Monitoring Icequakes in East Antarctica with the Raspberry Shake” in a focus section called “Arctic and Antarctic Seismology”, in the journal Seismological Research Letters. The focus section sounds like it was made for us doesn’t it? We were very lucky timing wise, as these special issues don’t come around very often!

GETTING THE SHAKE READY FOR ANTARCTICA

Kate on a snowmobile, about to head out for a day of science, with from her home-from-home – the Princess Elisabeth Antarctica Research Station behind her. Credit: Kate Winter and the International Polar Foundation.

In the paper we discuss how we set up and programmed three RS3D units before we installed them in Antarctica. As internet is severely limited in Antarctica, we had to make sure the RS3D sensors would continue to collect data without automatic upload to the Raspberry Shake server. This was a very easy job to do – using some basic python programming, which we note in Rupert’s ‘Remote installation of a Raspberry Shake’ guide – which he created as a kind of personal fieldwork manual (mainly for some landslide detection work in Scotland).

We also had to create some insulated battery boxes to try to protect the RS3D units (and the large leisure batteries that powered them) from blowing snow and the cold air temperatures. Again, this was easy to do – with the help of carpenters working at our research base – the zero emission Princess Elisabeth Antarctica Research Station. The carpenters constructed wooden boxes with foam surrounds which we secured on the ice surface with long screws. To power each of the RS3D units off-grid, we connected each of the units to a 100 Ah, 12 V leisure battery using a micro-USB DC 12–5 V invertor (like this one). RS power consumption, measured using an inline power consumption logger prior to deployment, was estimated to be 2.8 W during start-up and 1.25 W during runtime – so the batteries were certainly big enough for our short-term pilot study in Antarctica.

In January 2020 we installed the RS3D sensors on a wind-scoured blue ice area close to the research station, to explore local seismicity, in the form of ice cracks and quakes. 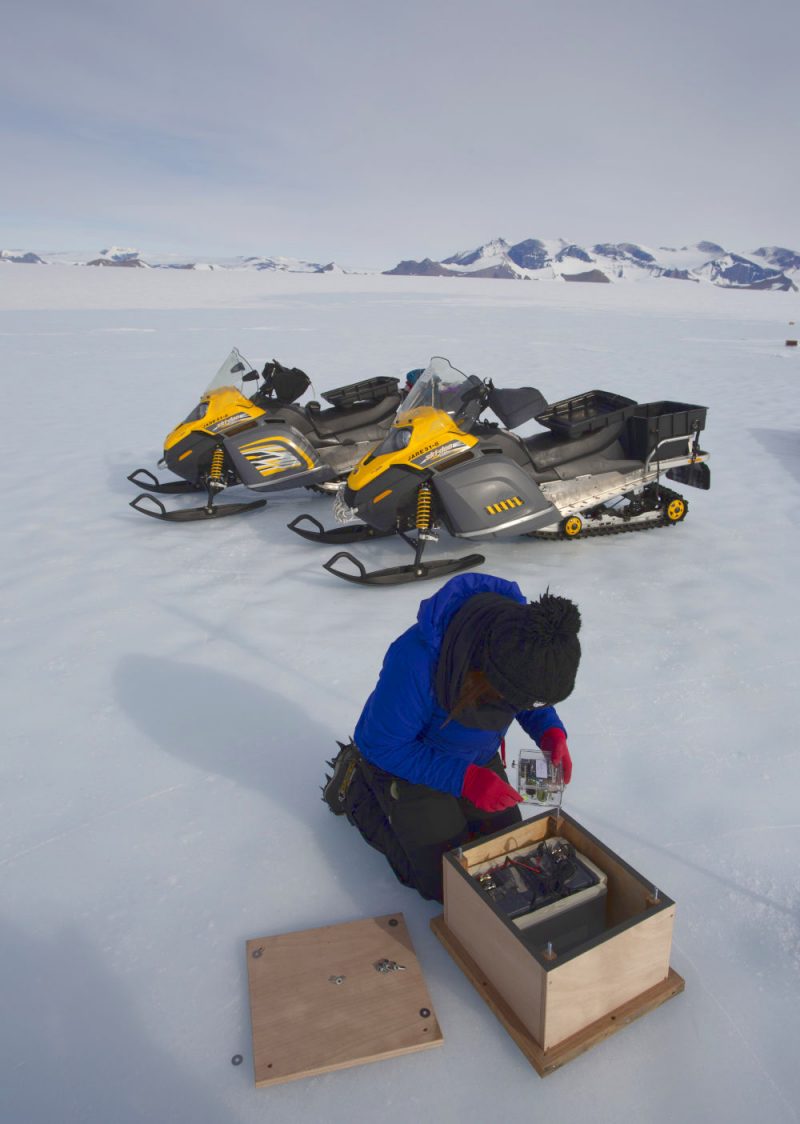 Over a 10-day monitoring period one of the seismometers we deployed recorded 2936 icequakes! These icequakes create popping and cracking noises which we can actually hear pinging across the blue ice surface when we visit the site later in the day (from 4pm onwards) but they don’t pose any threat to the stability of the East Antarctic Ice Sheet, and the compressional nature of blue ice means that the icequakes won’t create gaping crevasses for us to fall down – thankfully!

Here is a sound clip I recorded while out in Antarctica of the blue ice cracking:

Initially I thought we might record a couple of hundred icequakes over our short monitoring period, so I was very surprised to have recorded almost 3000 of them. To validate the dataset, we compared our results to a broadband seismometer station situated close to the research station. The data broadly matched our Raspberry Shake research findings – with notable exceptions which we can account for – like the broadband station picking up a lot more human activity from the comings and goings at the research station, as well as seismic signals from further afield – like crevasses and rockfalls.

WHY DOES THE ICE QUAKE?

By comparing our RS3D data with local air temperature measurements, and satellite derived surface temperature measurements from the thermal infraRed sensor onboard Landsat8 we discovered that diurnal fluctuations in solar radiation (in the order of just a few degrees) are responsible for local ice surface temperature changes. These surface temperature changes drive thermal contraction of the ice when temperatures rise in the morning and fall in the evening – generating the blue ice seismicity we recorded in the RS3D units and the broadband seismometer. Whilst the icequakes we record do not pose any risk to wide-scale ice sheet stability, or to staff working near the research station, our short-term seismic investigations provide us with valuable information on the thermal state of the ice and ice fracture mechanics in blue ice areas (which are often difficult to obtain by other means). 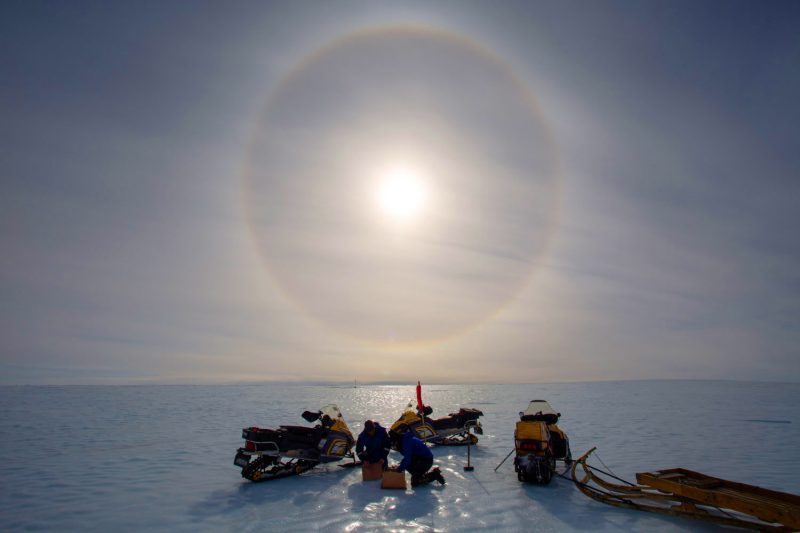 The RS3D units were placed in wooden boxes to protect them (and the large leisure batteries that powered them) from blowing snow. The katabatic winds scour away any surface snow, making the ice appear blue. In this photograph Kate and her field guide Henri Robert are making final installation checks, under a magnificent sun halo. Credit: Kate Winter and the International Polar Foundation

Our research shows that the RS can collect important information in glaciated environments, after minimal modification. I hope that our research paper will help those of you who wish to take your RS to some beautiful, extreme environments in the future. I will certainly pop a RS or two in my kit bag the next time I travel to the Arctic or Antarctic. As they are so small and lightweight, I won’t have to take out too much of my emergency chocolate to fit them in!

At Raspberry Shake we would like to say a huge thank you to Kate Winter for keeping us up to date on her research over in Antarctica. Good luck on your next adventure!