Dig Deeper into How Earthquakes are Interpreted

Students will increase their knowledge of how:

This lesson plan assumes that educators have gone through and completed all setup necessary for the Raspberry Shake. Regardless of whether you have or have not completed set up, we recommend that before educators start teaching with the Shake, they visit and read through our Classroom Tips page. Then, you are ready to get your classroom shaking!

To start this lesson, tell your students that today they will step into the shoes of seismologists! They will learn the process of triangulation, and then practice by locating earthquakes. They will gain an understanding of how the physics of earthquake waves work and how they propagate.

Now that we know the basics of seismology, what seismic activity is and how seismographs work, we can dive deeper into understanding seismic data.

To understand how seismologists interpret seismic waves, we must first understand what are the different types waves.

The different types of seismic waves

Body waves include primary waves (also called P-waves) and secondary (or S-waves).  P-waves are also called compressional waves because they push and pull material as they propagate. They are the fastest moving waves and therefore are the first waves detected by seismographs.

The slower S-waves, also called shear waves because of the side-to-side movement they create as they pass through material, are detected later by the seismographs. S-waves have a much lower frequency than P-waves.

Surface waves are the last to arrive because they travel over the less-direct path of the Earth’s crust. They are the most destructive type of earthquake wave because of the way they move ground.  Surface waves move similarly to ocean waves.

How do seismologists interpret seismic readings?

One of the most important actions that seismologists must do when a new earthquake is recorded is identify the epicenter, or the point on Earth’s surface where the earthquake occurred. Triangulation uses seismic data from three or more seismograms to identify the epicenter by estimating the time interval between the arrival of the P and S-waves. The distance away from a seismograph can be deduced from measuring the P-S wave time intervals and estimating the epicentral distance – this is calculated for you on the “EQ Locator” app on the Raspberry Shake website. If this is done for three or more seismograms, then it is possible to identify the approximate location of the epicenter by finding the intersection of these three distances (the red star in the image below). 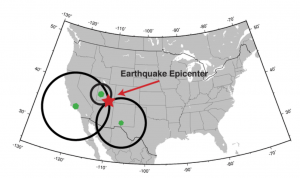 First, demonstrate to the students how to use the EQ Locator web app. For step-by-step instructions on using the web app, watch the tutorial video.

Then have the  students get on a computer and navigate to locator.raspberryshake.org. The students have the task of using the EQ Locator web app to practice triangulating earthquake epicenters by identifying P- and S- waves.

Students can then volunteer to share their experiences of using the EQ Locator app. Was triangulation, or “picking”, as it is commonly referred to in seismology, easy or hard? How successful were you the teacher? Let the class know!

Volunteers share with the class one thing they found challenging, and why.

This website uses cookies to improve your experience while you navigate through the website. Out of these cookies, the cookies that are categorized as necessary are stored on your browser as they are essential for the working of basic functionalities of the website. We also use third-party cookies that help us analyze and understand how you use this website. These cookies will be stored in your browser only with your consent. You also have the option to opt-out of these cookies. But opting out of some of these cookies may have an effect on your browsing experience.
Necessary Always Enabled
Necessary cookies are absolutely essential for the website to function properly. This category only includes cookies that ensures basic functionalities and security features of the website. These cookies do not store any personal information.
Non-necessary
Any cookies that may not be particularly necessary for the website to function and is used specifically to collect user personal data via analytics, ads, other embedded contents are termed as non-necessary cookies. It is mandatory to procure user consent prior to running these cookies on your website.
SAVE & ACCEPT