What is Raspberry Shake? An Introduction to Seismology and Seismographs.

Explain basic concepts, such as:

Setting up and introducing students to a Raspberry Shake opens many diverse learning opportunities, pertaining to many disciplines for all ages and grade levels. The Shake can be applied to Earth Science, Physics, Computer Science, Engineering, Mathematics, and much more. Like all environmental sensors, the Raspberry Shake seismograph is a direct demonstration of how humans can interpret and interact with their environment.

This lesson plan assumes that educators have gone through and completed all setup necessary for the Raspberry Shake. Regardless of whether you have completed setup we recommend, before educators start teaching with the Shake, they visit and read through our Classroom Tips page. Then you are ready to get your classroom shaking!

Introduce Raspberry Shake to the students as a new scientific tool in your classroom to be applied to hands-on projects. To gain their excitement and interest, start the class by plugging it in, finding it online, and watching the data in real time!

1). Show the Shake to the class (unplugged).

2). Plug the Shake in, and watch the lights turn on.

3).  Go to browser and type in rs.local, and open StationView and find your shake. As you and your students see the live data streaming, stand everyone up, countdown, and then jump as hard as you can all together. Watch the students’ (of all ages) excitement!

Then use our presentation to explain to your students what the Raspberry Shake is!

To understand what the Raspberry Shake seismograph is and how it works, we must start by gaining an understanding of what seismology and seismic waves are. So, we will start with the question:

What are seismographs and how are they used?

A seismograph is a device that detects and records ground movement. The sensor, called the seismometer, is a suspended mass that remains still until the Earth moves. As the mass moves, it sends analog data to a “digitizer”.   This converts the data into frequency and amplitude, a digital signal. Data is then transformed by a digitizer which translates motion into a digital image that can be seen on a computer monitor.

Seismographs can detect ground motion from earthquakes to a car driving near by. Any movement that travels through the ground is picked up by these sensitive devices. For this reason it is common to see “noise” on seismographs in areas with commuter traffic and other human activity.

What about our Shake? What is a geophone?

The Raspberry Shake has two main components: an environmental sensor that measures the ground movement, the geophone, and it also contains an analog-to-digital converter, and the digitizer box.

The main sensor is a geophone. We can think of a geophone as a low-frequency “microphone” for listening to the ground. A geophone works by generating electric signals that represent ground motion (such as earthquakes, or any seismic activity!). These signals are positive (+) and negative (-);  they are measured through voltage. We refer to them as “analog” signals.

When you pass a magnet through a coil, an electrical current is generated in the coil. Inside a geophone – a coil is suspended on a spring surrounded by a magnet. As the Earth moves and shakes, the mass rises and falls, passing up and down around the magnet creating a small electrical current. See the geophone diagram in Figure 1 below.

The Raspberry Shake board contains a digitizer, the device that converts the data into a digital signal so that you can see the seismic wave on your computer screen. 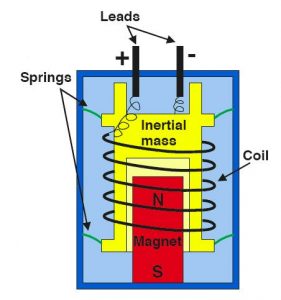 Figure 1: Diagram of a geophone and its parts.

How can we use our Shake?

The Shake can be used to measure anything that causes ground vibrations and it can process that data in a variety of ways. The raw seismic data that the Shake records can be seen on s seismic application called SWARM. SWARM also allows users to access all Raspberry Shake seismographs forwarding data to the network. As of today, you can see the data from more than 1000 stations from across the world!

The Shake can also do much more than measure earthquakes. Any ground vibrations are detected by the Shake’s sensitive geophone – your Shake can detect traffic, fireworks, busy streets, strong bass speakers… anything that can cause the ground to vibrate!

For example, the University of Michigan created a “cheer-meter”, to measure which team had the biggest applause during sports games. They created Cheer Magnitude equations and everything! Just imagine the possibilities of use in your classroom and school, outside of an earthquake monitor.

Allow students to use laptops to explore the Raspberry Shake website, especially the Station View (near real time map of Shakes around the world!) and EQ View (near real time map of earthquakes around the world) web apps. Explain how each of the stations play a part in the EQ View earthquake map (Figure 2), and how your Shake is a part (or will be a part) of that network.

Time: 5-10 minutes — Planning for the Future

Option 1: Students get into groups of two or three and brainstorm five (5) uses for the Raspberry Shake seismograph other than detecting earthquakes. Then, ask for volunteers to share with the class. This will leave the students thinking all about future possibilities.

Option 2: Tell the students that it will soon become part of an important global seismic network, which detects, identifies, and measures earthquakes! They have to come up with ideas of the best place in the school to deploy the Shake as part of the seismic network. Noise, power, ethernet, etc. all need to be considered. A basement or lightly-used closet on a ground floor are often the best earthquake listening areas, but you can put it anywhere.

SAVE & ACCEPT
Go to Top